Had The United States not liberated South Korea from the North’s aggression 60 years ago during the Korean War, I would never have had the opportunity to sit here, contemplate about promoting freedom for others, and write this essay.
In the early summer morning of mid June 1950, North Koreans, under the command of Kim-II- Sung, struck south of their border. South Korea was taken by surprise and because of weak defenses was helpless. Thousands of lives already were lost on both sides when the armistice was initiated in 1953. Ever since then, North Korea has fallen into utter isolationism while the South has become a free republic. Today, North Korea is decades behind the technology, when on the other hand, South Korea stands as world’s 12th strongest power.

Most of us take our democratic society for granted because we never had to experience living in a polar opposite society, where we are deprived of our first amendment rights and freedom of choice to believe in what we want. When we watch news about countries that are ruled by dictatorship and through fear, it seems so distant from us because we can’t really relate it to our lives.

In North Korea, there are 24 million people, approximately 3 times the population of New York City, suffering under a communist regime. Of those 24 million, there are over 200,000 people imprisoned in gulags. It is unbearable to picture how so many people, whether male or female, whether a child or an elder, would suffer from malnutrition, poor sanitation, hard labor and abuses and die without remorse.

Unfortunately, most people do not have any idea what a life is like behind the tightly closed doors of North Korea. The North Koreans have no political rights whatsoever; there is no presidential election every 4 years. The Kim family, now down to the third generation, has been ruling for last 60 years. Human Rights have been extirpated and overshadowed by the totalitarian government. Something must be done to promote political rights and civil liberties for people in North Korea. There are things that we and the government can and should do to bring about even just a little change for North Koreans because every big change starts out small.

There are parts of the solution that we, the people can undertake to advocate political rights and civil liberties for North Korea. First, we need to change our perception. North Korea was referred to as one of the “Axis of Evil” in President Bush’s State of Union address. The people of North Korea are often viewed as one big mass of evil. However, they are the ultimate victims of a terribly corrupt government. Therefore, we need to shift our focus to the civilians who are starving to death.

Second, we need to bring awareness of what has been going on in North Korea to as many people as possible. In the 21st century where the technology has advanced beyond our belief, the internet has become a powerful tool that connects everyone from all over the world. Aside from looking at the debate about the true intention of the campaign, Kony 2012 was unrivaled in getting the message about a human rights problem out into the public. The group of individuals – not politicians, not scientists, celebrities, or billionaires – brought awareness to the world by the use of the internet. We can learn from this and exploit the internet to illuminate the truths and spread the news about the people of North Korea.

The next step the U.S should take is to provide genuine truths and information to the people of North Korea. North Korea has been heavily guarded with massive propaganda for last 60 years. The people are fed lies and are totally oblivious to what is going on outside their borders. However, if we come into North Korea to distribute food, the Koreans will see that the U.S, a democratic and a capitalist society, is more prosperous and in fact, helping them out. This truth will be eventually understood by the people. On the flip side, there is no way North Korea will just let U.S. spread its capitalist and democratic ideals. This is why we need to be very subtle in planning things out so that we will do just enough to ignite the enlightenment in the people’s subconscious. If we do it right the people will realize that something is wrong with their society and their leader. Their hearts will be kindled with desire to gain freedom in their corrupted world.

Even though I am sure that bringing about civil liberty and political rights will be impossibly hard and frustrating, I know that something must be done to solve the situation. Everyone can contribute to bring change by spreading the words about the situations in North Korea. The United States should put efforts and make subtle plans to encourage the people of North Korea to eventually beginning a revolution to overthrow evil and corruption.

As my grandmother, Renee, and I head towards the entrance of Mamaroneck High School, her eyes catch a glimpse of the Kemper Memorial. Without hesitation she changes direction and stops right in front of the monument’s center. I watch her as the muscles of her face tighten and a tear glides down her cheek. Her connection to the names inscribed in the stone feels magnetic, and so strong that I can sense the pull. I notice her lips mouthing the names of each individual, as she honors those who passed in World War II. After vigilantly reciting the veterans’ names, she cranes her neck to face me. Without uttering a word, she transfers the stories of her past. They’re written in the creases of her forehead, each wrinkle representing another emotion that shook her world during the war.

I was transported to the village of Grenade, France, where I could see her young and vulnerable at the age of seven, standing in the middle of the street with Yvonne, her older sister. Yvonne restrained her while she yelped and cried, as her parents were loaded into a truck to be deported. No one knew exactly where her parents, who were Jewish, would end up; all they could do was hope.

Hidden in a Catholic convent for young girls, Renee and Yvonne were protected from the Nazis. Their parents were both sent to concentration camps and forced to endure the atrocities that haunt our world today. Thankfully my grandmother was never physically hurt during the Holocaust, but her mental health has been greatly affected by the numerous traumatic experiences.

A moment later, I am again staring into my grandmother’s pained eyes as they remain fixed on the memorial. While the lines in her face dismay me, I know there is a sense of hope as her eyes brighten and her lips ripen into a smile. As I turn to the Kemper Memorial, I don’t just see an array of names anymore. An overwhelming desire to honor these veterans comes over me, for their bravery, strength, and the pain they endured. Within the crevasses of this stone, many memories and stories are protected.

Even though I’m able to see the memorial from her perspective, it is important that I interpret it in my own way. We live everyday because these veterans fought for us. It is crucial that our generation honor them and the comrades who carry on their legacy today.

I believe one of the most important ways that people today can honor our country’s veterans is by sharing their stories and educating students about what they fought for. It is the choice of the veterans’ families to tell the stories, but it is our responsibility to listen. Renee and Yvonne have spent many years recording and expressing their past memories. I’ve heard them present their stories to their family, schools, or even the person sitting next to them on the bus. People are more emotionally affected when they hear the personal accounts of hardships faced by veterans or survivors. By knowing specifics stories, the sacrifices of many others come alive with greater reality.

In school, when students learn about wars, they hear about major battles and peace agreements, but in order to remember those brave men and women who sacrificed their lives, kids must be taught personal stories of veterans. Telling a specific veteran’s story can create a more intimate connection, making students aware of what they fought for.

Each of the heroes inscribed in the Kemper Memorial has a story to be heard. My grandmother, mother, and I would not be here today if it weren’t for these and so many other brave American soldiers. Grandma Renee claims to be forever grateful because of the sacrifices made to save innocent people like herself. The soldiers who fought for the lives of others deserve to be remembered. With the patience of our generation and the cooperation of those who hold their stories, our veterans’ legacies can live on. 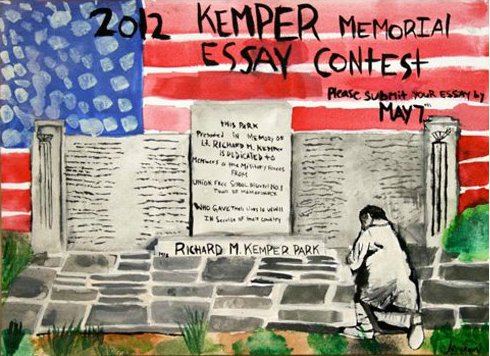